Thank you for saying that you like my books!

I didn’t mind calling myself “J.K.”. You see, I’d always been sorry my parents didn’t give me a middle name, so I got to call myself Kathleen after my favourite grandmother! 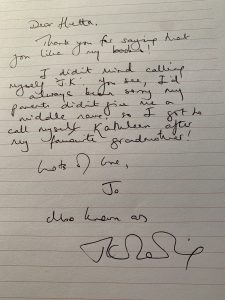 Previous writing: « The next JK Rowling may need help from an arts programme

Next writing: The Ickabog – Welcome message »

I love this site, which I discovered towards the end of writing Order of the Phoenix, and which made me feel exceptionally guilty, as you can imagine. I am so proud of the fact that a character, whom I always liked very much, though he never appeared as much more than a brooding presence in the books, has gained a passionate fan-club.

At the launch of Goblet of Fire at King’s Cross, London, I shook hands with a woman who leaned forward and whispered conspiratorially, ‘Sirius Black is sexy, right?’ And yes, of course she was right, as the Immeritus club know. The best-looking, most rebellious, most dangerous of the four marauders… and to answer one burning question on the discussion boards, his eyes are grey.

The fan art on here is very good. For a while I had a picture of the four marauders drawn by Laura Freeman on my desktop. It is a particularly accurate portrayal of Sirius and Lupin.

A great site run by real enthusiasts. The people who designed this site have really Thought It Through – my kind of people. I am however shocked at the number of moderators who want to be sorted into Slytherin… and you should know that the Hufflepuffs’ common room isn’t a dungeon, it’s more a cellar – a subtle but important difference.

This is such a great site that I have been known to sneak into an internet café while out writing and check a fact rather than go into a bookshop and buy a copy of Harry Potter (which is embarrassing). A website for the dangerously obsessive; my natural home.

It’s high time I paid homage to the mighty MuggleNet. Where to start? I love the design, (I currently favour the ‘Dementor’ layout), the polls (I actually voted in the ‘Who’s the Half-Blood Prince?’ one), the pretty-much-exhaustive information on all books and films, the wonderful editorials (more insight there than in several companion volumes I shall not name), 101 Ways to Annoy Lord Voldemort (made me laugh aloud), the Wall of Shame (nearly as funny as some of the stuff I get)… pretty much everything. Webmaster Emerson, Eric, Jamie, Damon, Ben, Matthew, Rachel, Jaymz and Sharon, I salute you.

The Harry Potter Automatic News Aggregator was the very first Harry Potter website I ever visited, though it has changed almost beyond recognition since those early days. A fantastically user-friendly fansite, faster off the mark with Harry Potter news than any other site I know, and with all kinds of brilliantly inventive touches. I particularly like the points system, whereby dedicated posters can work their way up from ‘Muggle’ to ‘Auror’ and beyond – though speaking of titles, I hoped that ‘High Inquisitor’ (moderator name) would have died out when Umbridge was run (galloped?) out of Hogwarts. On the other hand, ‘Guillaume’ and ‘Broggy’ (surnames of two of the masterminds behind HPANA) are just begging to be used for fictional wizards.

It is about the worst kept secret on this website that I am a huge fan of The Leaky Cauldron, which I have mentioned before now in News items. I have met one of its founders, Melissa, on two occasions; outside the Albert Hall before I did the reading for ‘Order of the Phoenix’ and after the premiere for ‘Prisoner of Azkaban’, and in a matter of mere months I will be talking to her properly as she will be coming over to Edinburgh to interview me on publication weekend.

‘Leaky’, as it is affectionately known to its many fans, is a wonderfully well designed mine of accurate information on all things Harry Potter. It also attracts a lot of knowledgeable and entertaining debate. So to Melissa, B.K., Kristen, Sue, John, Nick and Natalie, congratulations and thank you! And Heidi… thank you very much for the present for Mackenzie… she wears it often!

I’ve had a few fan letters from South America mentioning this fansite, so I thought I’d pay it a visit. Now I’ve done so, I understand why this site draws loyal fans. I love the distinctive, woodcut-style graphics and I was particularly touched by the fact that Harry was almost level with Ron and Hermione a close second in the ‘favourite character poll’. At least they appreciate my hero over at Potterish. I was also grateful to note that they told their visitors to take the ‘news’ that I’ve written 750 pages of book seven with a pinch of salt. Thanks, Potterish: have a Fansite Award in appreciation of your style, your Potter-expertise and your responsible reporting.

How could I not love a fansite whose contributors include people named Thaddeus and Aunna? This is a great Australian site with an impressively young staff who have produced some really insightful editorials; I wish I could highlight a couple of them, but that would be waaaay too revealing. If you head over to FAQs, however, you will see some of the open letter questions answered (at long last, yes, I know… but I had to finish “Deathly Hallows” first)

So congratulations and thanks, Andy, to you and all your talented colleagues.