Note: Warner Bros. and movie prop and merchandise specialist The Noble Collection have created the Lumos Harry Potter Charm Bracelet Collection, available to purchase through The Noble Collection shop. At least 15% of the suggested retail price of the charm bracelet will go to Lumos Foundation. They included a presentation card with a message by J.K. Rowling.

A charm bracelet seems a very innocent trinket. What other piece of jewellery is so imbued with memory and sentiment? Why do we call those little masterpieces “charms” if not in allusion to their talismanic properties? They have meaning beyond the mercenary. They are personal amulets.

Lumos is a spell I created in HARRY POTTER that brings light to a desperately dark and frightening place.

At Lumos this is just what we do: we reveal the hidden children locked away behind closed doors and forgotten by the world, so that everyone first of all understands the problem and then works together to fix it. 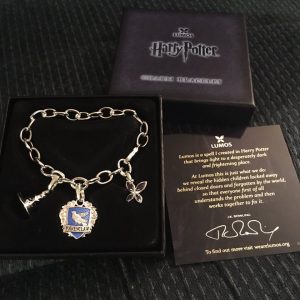 Previous writing: « On Monsters, Villains and the EU Referendum

When Transfiguring, it is important to make firm and decisive wand movements. Do not wiggle or twirl your wand unnecessarily, or the Transfiguration will certainly be unsuccessful.

Form a clear mental picture of the object you are hoping to create before attempting a Transfiguring spell.

Incomplete Transfigurations are difficult to put right, but you must attempt to do so. Leaving the head of a rabbit on a footstool is irresponsible and dangerous. Say ‘Reparifarge!’ and the object or creature should return to its natural state.

Larger creatures are difficult to Transfigure except by skilled and powerful wizards. Know your limits.

Next writing: The Potter Family »

Hogwarts school trunks, like the majority of wizarding luggage, are issued with capacity enhancing or extension charms as standard. These spells not only increase the interior dimensions of objects, while leaving the outer ones unchanged, they also render the contents lighter.

The Extension Charm (‘Capacious extremis!’) is advanced, but subject to strict control, because of its potential misuse. Theoretically, a hundred wizards could take up residence in a toilet cubicle if they were sufficiently adept at these spells; the potential for infractions of the International Statute of Secrecy are obvious. The Ministry of Magic has therefore laid down a strict rule that capacity-enhancement is not for private use, but only for the production of objects (such as school trunks and family tents), which have been individually approved for manufacture by the relevant Ministry Department. Both Mr Weasley and Hermione Granger were acting unlawfully when they enhanced, respectively, the interior space of a Ford Anglia, and a small handbag. The former is now believed to be living wild in the Forbidden Forest at Hogwarts, and as the latter played no insignificant part in the defeat of the greatest Dark wizard of all time, no charges have been brought.

The Patronus is the most famous (and famously difficult) defensive charm. The aim is to produce a silvery-white guardian or protector, which takes the form of an animal. The exact form of the Patronus will not be apparent until the spell has been successfully cast. One of the most powerful defensive charms known to wizardkind, the Patronus can also be used as a messenger between wizards. As a pure, protective magical concentration of happiness and hope (the recollection of a single talisman memory is essential in its creation) it is the only spell effective against Dementors. The majority of witches and wizards are unable to produce Patronuses and to do so is generally considered a mark of superior magical ability.

The Patronus Charm is one of the most ancient of charms and appears in many accounts of early magic. In spite of a long association with those fighting for lofty or noble causes (those able to produce corporeal Patronuses were often elected to high office within the Wizengamot and Ministry of Magic), the Patronus is not unknown among Dark wizards. While there is a widespread and justified belief that a wizard who is not pure of heart cannot produce a successful Patronus (the most famous example of the spell backfiring is that of the Dark wizard Raczidian, who was devoured by maggots), a rare few witches and wizards of questionable morals have succeeded in producing the Charm (Dolores Umbridge, for example, is able to conjure a cat Patronus to protect herself from Dementors). It may be that a true and confident belief in the rightness of one’s actions can supply the necessary happiness. However, most such men and women, who become desensitised to the effects of the Dark creatures with whom they may ally themselves, regard the Patronus as an unnecessary spell to have in their arsenal.

No reliable system for predicting the form of an individual’s Patronus has ever been found, although the great eighteenth-century researcher of Charms, Professor Catullus Spangle, set forth certain principles that are widely accepted as true.

The Patronus, asserted Spangle, represents that which is hidden, unknown but necessary within the personality. ‘For it is evident,’ he writes, in his masterwork ‘Charms of Defence and Deterrence’:

‘… that a human confronted with inhuman evil, such as the Dementor, must draw upon resources he or she may never have needed, and the Patronus is the awakened secret self that lies dormant until needed, but which must now be brought to light…’

Here, says Spangle, is the explanation for the appearance of Patronuses in forms that their casters might not expect, for which they have never felt a particular affinity, or (in rare cases) even recognise.

Spangle is interesting on the subject of those unusual witches and wizards who produce a Patronus that takes the form of their favourite animal.

‘It is my firm belief that such a Patronus is an indicator of obsession or eccentricity. Here is a wizard who may not be able to hide their essential self in common life, who may, indeed, parade tendencies that others might prefer to conceal. Whatever the form of their Patronus, you would be well-advised to show respect, and occasionally caution, towards a witch or wizard who produces the Patronus of their choice.’

The form of a Patronus may change during the course of a witch or wizard’s life. Instances have been known of the form of the Patronus transforming due to bereavement, falling in love or profound shifts in a person’s character. Thus Nymphadora Tonks’s Patronus changes from a jack rabbit to a wolf (not a werewolf) when she falls in love with Remus Lupin. Some witches and wizards may be unable to produce a Patronus at all until they have undergone some kind of psychic shock.

It is usual, but not inevitable, for a Patronus to take the form of an animal commonly found in the caster’s native country. Given their long affinity with humans it is perhaps unsurprising that among the most common Patronuses (although it must be remembered that any corporeal Patronus is highly unusual) are dogs, cats and horses. However, every Patronus is as unique as its creator and even identical twins have been known to produce very different Patronuses.

Extinct Patronuses are very rare but not unknown. Strangely, given their long connection with wizardkind, owl Patronuses are unusual. Most uncommon of all possibly Patronuses are magical creatures such as dragons, Thestrals and phoenixes. Never forget, though, that one of the most famous Patronuses of all time was a lowly mouse, which belonged to a legendary young wizard called Illyius, who used it to hold off an attack from an army of Dementors single-handedly. While a rare and magical Patronus undoubtedly reflects an unusual personality, it does not follow that it is more powerful, or will enjoy greater success at defending its caster.

Note: Book of Spells (or Wonderbook: Book of Spells) is an augmented reality video game for the PlayStation 3. It was developed by SCE London Studio in conjunction with J. K. Rowling and Warner Bros. Interactive Entertainment as a companion to the Harry Potter series. The game is based on Book of Spells, a fictional book by Miranda Goshawk released about 200 years from the event date.
Only the beginning of this text can be displayed here for research purposes. I apologize!

Check our FAQs to know more about this work.

Previous writing: « The Sword of Gryffindor

Next writing: I feel duped and angry at David Cameron’s reaction to Leveson »

Charms differ from Transfiguring Spells in the following manner: a charm adds certain properties to an object or creature, whereas a transfiguring spell will change it into something utterly different.

The lesser charms are not very difficult to break and many of those that you learn as a young wizard will wear off in a matter of days or even hours.

Dark charms are known as jinxes, hexes and curses. This book does not deal with such spells.

Lapses in concentration while charming can result in painful side effects – remember Wizard Baruffio, who said ‘s’ instead of ‘f’ and found himself lying on the floor with a buffalo on his chest.

Some charms will be ineffective on large creatures such as trolls, whose hides repel all but the most powerful spells.

Next writing: One Thousand Magical Herbs and Fungi »

Curses and Counter-Curses, by Professor Vindictus Viridian, is a spellbook which contains jinxes and curses.

Next writing: The Mirror of Erised »