Young ladies 200 years ago weren’t allowed to read novels because it would inflame them, excite them, and make them long for things that weren’t real. I was distressed to read about Virginia Woolf being told she mustn’t write because it woudl exacerbate her mental condition. We need a place to escape, whether as a writer or a reader, and the world that I’ve createdis a shining example of a world to which it’s pleasant to escape. I recall the beautiful image from C.S. Lewis where there are the pools, the “World Between Worlds,” and you can jump into the different pools to access the different worlds. That for me was always a metaphor for a library. And that for me is what literature should be.
Today, children need stories because they need to test their imaginations, try on other people’s ideas, inhabit other lives, send their minds where their bodies are not yet mature enough to go. No films, no TV program, no computer or video game can ever duplicate the magic that occurs when the reader’s imagination meets the author’s to create a unique, private kingdom.
In writing Harry Potter, I sought to show how truly heoric it is to fight a battle that can never be won. 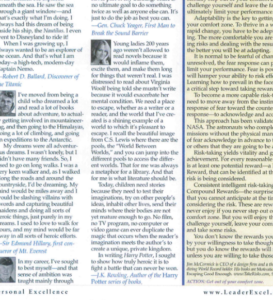 Previous writing: « The Noble and Most Ancient House of Black

Next writing: Foreword: Becoming myself »